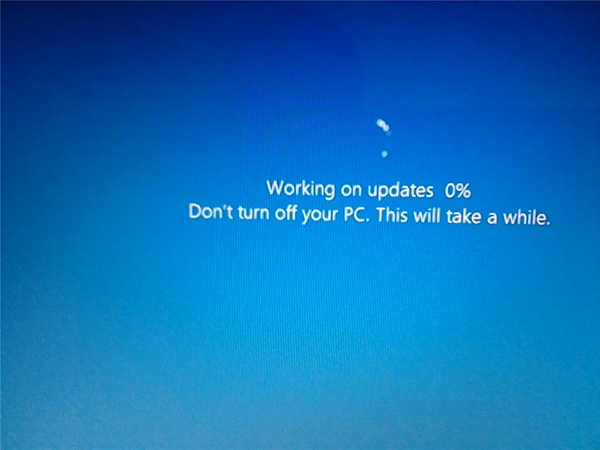 Hello everyone, long time no see! It's quite a long time that I didn't update my blog. Maybe for 3 weeks.

Let me tell you why I didn't update the blog...

You know, we released a new version of our FIX API trading platform two weeks ago, the new stuff is for individual traders. We still need to test it to make sure whether the new stuff is working as well as expected.

After the testing of one week, I found my laptop has no enough disk space. Then I planned to get more disk storage from another disk partition that installed Windows 10.(I have a dual boot system) I haven't used Windows for more than one year. Then after I restarted my PC to switch to Windows 10, it automatically started updating...

After 3 hours, I was notified that my disk space was not enough... The Windows partition had 15G spare storage, why still not enough to update??? Now I'm using Linux, the whole disk space required is less than 20G after the initial installation, and working very well!!

Windows asked me to inject a USB or SD card to supplement the required disk storage. But why not tell me before the auto-update??!!

I had to follow the instruction and after 3 more hours, I was told to restart PC again to refresh and make the new update activated. I did. But the PC was stuck at the progress showing 0%!!!

I waited for 5 hours!!! The progress is still 0%! I searched google for how to solve the problem. (Fortunately, I had a mobile phone to do the search! Otherwise, I couldn't have made a decision to stop updating to avoid wasting time on such a 💩!)

The answers for that problem(so-called update 1903) were not helpful, there were no official guys to answer, just moderators so-called independent assistants...

They even asked the users to check DHCP... What's wrong with DHCP?? The update spent more than 6 hours downloading more than 5G TRASH, why still need to connect to network??!!

Did the tech guys of Microsoft really test the update carefully before they released the TRASH??!!

I gave up finally. I forcibly rebooted the PC and kept the update not activated.

Because the problem that the disk space was not enough was not solved, so I uninstalled my old Linux Mint 17 and installed Linux Mint 19.3. Installing a new system took time... I had too many kinds of stuff to restore. That's why I had no time to update the blog for quite a long time.

This story told me a lesson: NEVER NEVER NEVER use MS products. It's painful and makes sense.

I have been using Linux Mint for more than 5 years, and in the recent one year, I'm keeping using it without switching to other OS. It's quite a promising stuff, robust and great. I like it very much. If you are a tech professional and still have a headache to use Windows, I recommend you try it out. You will NEVER switch back again.

By the way, we will use neural networks, genetic algorithms on our trading. Please feel free to track our trading records.

# Fintechee is the most promising Forex trading platform. Please access Fintechee's website to know more details. Fintechee provides cryptocurrency price on their website. Here is the link: https://www.brokerless.cc, the frontend is based on Fintechee WEB Trader. AngelInvestmentNetwork.org has some cases. You can find news at PlaygroundFX and LetplayFX

We built a new marketplace for selling EAs and indicators

We developed plugins to make Fintechee compatible with MQL!

What is Expert Advisor Studio?

How to identify different accounts at Fintechee?

How long to make you start using a trading platform?

How to use the Neural Network EA to help us analyze the markets?

How to choose liquidity providers?

The traditional optimizer has been obsolete.

Expert Advisor Studio ~ Where do you backtest?